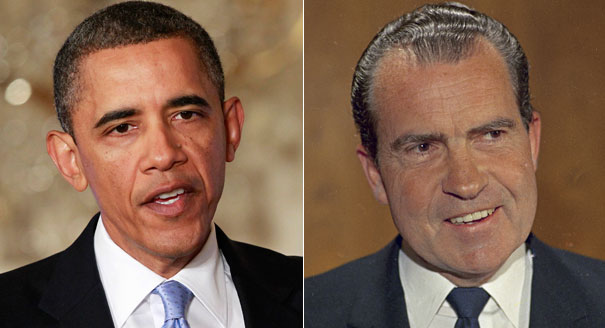 Nixon resigned. He resigned after a half-dozen Republican Senators told him, in the Oval Office, that a majority of Senators would vote to remove him from office if the House impeached him.

Nixon's crimes were limited to covering up a break-in and wiretapping by employees of his re-election committee.

Baraka Obama did worse. And he got by.

Department of Justice Inspector-General Michael Horowitz released his report on Monday. Here are the facts:

Just one fact, actually. But a big one.

The most powerful law-enforcement agency in the world abused its powers, broke the law, lied to federal judges, and falsified evidence 17 times.

Each of the 17 felonies had the effect of damaging the prospects and reputation of a candidate for president or of the President of the United States.

Those are the facts.

Horowitz concluded that he didn't have the authority to ascribe motive to these crimes.

President Barack Obama ordered the FBI and the DOJ to conduct illegal operations in an attempt to rig a presidential election.

Every reasonable person admits this.

Obama tried to steal an election.

But he didn't get caught.

It's easy to want revenge. It's normal to demand that Barack Obama die an old inmate in a federal penitentiary in New Mexico. Skinny, frail, sad, and broken.

It's what Obama deserves.

But it's not our job.

Our job is to destroy Democrats’ spirits.

Our job is to psychologically gut-punch the snowflakes.

Our job is to vote for Trump.

Our job is to cause a landslide.

A Landslide Beats a Trial

If you wake up on Wednesday, 4 November 2020 to the news that Donald Trump won 45 states to carry a massive mandate into his second glorious term as President of the United States, you won't be worried about a broken, frail Obama. You'll be relishing the future for you and your loved ones.

And that's a better vision: Great America. Greater than ever before.

Let go of the urge to punish bad people. You can't.

You can exalt the great people. People like Trump.

You can cause a landslide.

Winning is the best revenge.

And winners don't need to out-dick anyone.