Barack Obama Is Having a Very Bad Week, and Even WaPo Noticed 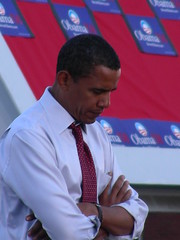 The smartest man in the world can’t make a gaffe, surely. When Barack Obama says something ridiculous, mean-spirited, wrongheaded, or just plain dumb, he means it.

So we know Obama considers the murders of Ambassador Chris Stevens and three others mere “bumps in the road” to his re-election. Four bumps, to be precise.

When Obama says Israel is just “one of our strongest allies” in the Middle East, no longer our strongest, he means it.

When Obama refers to Israel’s fear of a nuclear Iran as “noise” that he intends to “block out,” he means it.

Barack Obama meant it when he returned Winston Churchill’s bust. He meant it when partied in Vegas as terrorists attacked our consulates in Libya and Egypt.

Barack Obama’s worldview is easy to understand: he wants to reduce America’s prestige and to leave Israel twisting in the wind.