The St. Louis Cardinals were the major league team farthest west and farthest south until the 1950s. But that’s not the only reason the Redbirds built a massive flock of fans from the Alleghenies to the Rockies, and from Canada to the Gulf of Mexico.

This was just one of the amazing facts I put together reading Michael Patrick Leahy’s magnificent book, Covenant of Liberty: The Ideological Origins of the Tea Party Movement

No, Mike didn’t devote page space to the Cardinals. Instead, he traces the ideological roots of the Tea Party—and the government-loving hatchet men who’ve been chopping at those roots since the Constitution was signed. 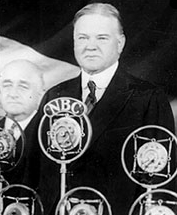 Hoover used his power as cabinet secretary under Woodrow Wilson, and later Republicans Warren Harding and Calvin Coolidge, to grab the radio airwaves as the exclusive property of the US Government. A champion of “associationalism” and public-private partnerships, Hoover granted mega-station power to a handful of lucky radio corporations. These stations got 50,000 watt, clear channel licenses, allowing them to blast their signals around the continent. And, thanks to geography, one station could broadcast around the world.

That station, KMOX in St. Louis, began broadcasting the St. Louis Cardinals in 1926. KMOX carried the Cardinals to farms, small towns, and cities throughout the Midwest and South Central states. In fact, by 1928, KMOX could be heard as far away as New Zealand, making it the first truly global radio station.The closest team to baseball fans in Missouri, Southern Illinois, Iowa, Arkansas, Texas, Kansas, Oklahoma, Alabama, Louisiana, Nebraska, Kentucky, and even Georgia was now available at 1120 AM.

Leahy points out the economic value of a clear channel license:

A clear channel license was, in essence, a license to print money because each clear channel station could, in the evenings, reach up to half of the geographical territory of the United States. Each station, then, could reach well over 50 million listeners, and advertisers were more than willing to pay top dollar to reach those listeners, provided of course that the programming was half way decent.

Hoover’s intention was to draw more power into the central government. In 1926,the Supreme Court struck down Hoover’s directives as Commerce Secretary. Those directives had given the government exclusive power to operate radio stations in the United States. The Navy was, for a time, America’s only radio network. It created the Radio Corporation of America (RCA) to manage its stations.

After the Supreme Court decisions, Hoover was ordered to issue radio licenses. Unwilling to surrender control to the free market, which he despised, Hoover managed to get Congress to adopt the Federal Radio Act of 1927—and Cardinal Nation was born.

One of the first things Hoover did was create a spectrum that allocated sixteen gigantic 50,000 watt stations across the country. He licensed these stations to General Electric, Westinghouse, and a few other powerful manufacturing interests.

Earlier, as Agriculture Secretary under Woodrow Wilson, Hoover was the first to win broad government control of food production and distribution. (President Obama’s Executive Order of March 16 extends the White House’s power to take over food and other industries, augmenting the damage Hoover’s statism as done.)

Hoover’s public policy legacy, according to Leahy, was, indeed, the Great Depression, but not for the laissez-faire we learned about in school. Instead, Hoover and his Republican Congress micromanaged the U.S. economy from the moment of his inauguration in 1929. Just as the economy began healing from the stock market crash, Hoover clobbered it with high tariffs, stifling regulations, tax increases, and soaring federal debt. (Sound familiar?)

Hoover’s autocratic control of radio helped make General Electric the government-dependent, tax-free behemoth it remains today. And it continued a precedent of broken Constitutional principles that extends back to the first hours of our republic.

By moving economic decisions from people to government, and by coopting corporations, Hoover laid the foundation for the financial disaster that struck during his administration. But he also helped make my Cardinals one of the most storied franchises in baseball.

Just one example of the way progressives have used passion to steal liberty from people. Leahy presents more.

In Covenant of Liberty, you’ll meet the first Tea Partier, John Lilburn of London, who spent years in prison in the 1640s for his insane desire to escape the arbitrary rule of other men. You’ll learn the underhanded tactics that Alexander Hamilton employed to circumvent Congress and the states in extending the reach of the federal government.

You’ll also be introduced to Leahy’s 4-Promises theory. That theory holds that the Constitution is a covenant in which the government makes four promises in exchange for its existence, granted by the states and the people. Those four promises are:

Every Tea Partier knows that the fourth principle fell in 2008 and 2009, with dynamic duo of TARP and the Bailouts. And if the principle somehow survived Bush and Paulson, it certainly died with the passage of ObamaCare and Nancy Pelosi’s frightening assertion that we’ll have to pass the bill in order to know what’s in it. “I’ll take whatever’s behind Door Number Four, Monty.”

You will gain some remarkable insights into American history, how we got where we are, and maybe even sports when you read Covenant of Liberty—the most important book about the Tea Party by a true Tea Party founder to date. It’s the best history book I’ve read in years, and you’ll be saying the same thing after you read it.

Covenant of Liberty Is Available Now

Covenant of Liberty is the best American history I’ve read in years. Michael Patrick Leahy, among a very small group of patriots who hatched the first round of Tea Parties in February 2009, documents the US Government’s 230 year history of Constitutional infidelity. My full review will be finished soon, but don’t wait: buy Covenant of Liberty today. https://rcm.amazon.com/e/cm?lt1=_blank&bc1=000000&IS2=1&bg1=FFFFFF&fc1=000000&lc1=0000FF&t=hennesssview-20&o=1&p=8&l=as4&m=amazon&f=ifr&ref=ss_til&asins=0062066331 Mike Leahy was the keynote speaker on day one of the 3rd Anniversary Tea Party in St.

Ed Martin Jr. of St. Louis has redirected his fire to the Attorney General race, and this is great news for everyone except Chris Koster. Back when Ed Martin was talking about running for the Republican nod to take on Claire McCaskill, I had another thought. Well, a bunch of people had another thought: Ed would make an outstanding Attorney General. UPDATE HUGE list of endorsements on Ed’s official press release.

What are the Perfect Ingredients of Great Book?

Writers are always looking for the perfect topic for a book. But there’s a problem. What’s important to me may not be important to you. And what you to read about, I might not care about. That’s why great books achieve a certain universality. They touch on the essence of life itself, of humanity itself, of existence. Some say that the secret to perfectly spellbinding stories is a mixture of just three elements: sex, food, and spirit.